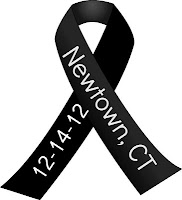 I have known of no one who has ever heard of Sandy Hook, Connecticut, outside of my family, of course.   I know about it because my sister lives there.  She and her husband raised their children there.  Their son and his wife raise their children there as well.   I have been to Sandy Hook many times.   Sandy Hook is a pretty little New England village in the town of Newtown.   No one should ever need to know of it.  Now everyone has heard of it.

My dear little great niece wasn't in school on Friday.  She was home sick.   Otherwise she would have been at school.   Do I thank God for that?   I don't thank or blame God for anything.   God to me is nothing more than an expression that has lost meaning.   Yet I struggle to express on one hand, incredible relief and on the other, wrenching heartbreak for the parents of these children.    Yes, I with my family are so relieved she is not hurt. I am, as is my family, heartbroken for other parents.   That is reality.

Long after the news cycle has moved on to other tragedies, this community and my family will find the broken shards of their lives and put them together with courage, compassion, and sheer determination.  They will create new lives and survive this.  They won't get over this but they will live through it and with it.

I am also angry.

I am heartbroken.  I am angry.  Mostly I am afraid.  I am afraid that our culture has taken a path of no return toward a societal death wish.  We have decided that it is more important to protect our right to own weapons of mass murder than it is to protect children from them.   For that, I weep.