I just woke up, sobbing.  I haven't done that in a while.   I dreamt about him.  He was back and he was reading.  He was barefoot.   He acted and spoke the way I remember.   In my dream he was reading on the couch.  He looked up with a kind of dazed expression, with his mouth slightly opened, to pretend to be annoyed.   He was reading something for school.  I was so glad he was back in school, but he just seemed annoyed by it.

It seemed as though the first part of his book was blank and he was starting in the middle, like in the middle of the semester.  I tried to talk to him about it, but he didn't want to talk about it.   It was as though he didn't want to let me be too close as if it was too much work to make me understand.  He was reading about the Civil War.  I thought it was kind of strange to be starting so late, in the middle of the semester, but I didn't care since he was with us.   I realized I needed to hug him, so I wouldn't lose him again.  I ran over and hugged him from behind and sobbed to him,

"Zach I love you.  I didn't get to tell you that I loved you before."


The way he said it was so real.  I can just hear his voice, the tone, the inflection.  It was the voice he used when he thought we were bugging him or wanting him to do something he didn't want to do.   He said,


I insisted.  I held him harder.

"No, I didn't tell you enough.  I need to keep telling you."


I thought if I could keep telling him and keep hugging him he wouldn't go.   Then I woke up.

I feel like I am back in July and he just left.    As I write this, I feel that pain in my chest that I felt for weeks (or was it months?) after he died.   I sobbed when I woke.   The dream was so real.  He was so close.  It is so wrenching, yet it was so good to recall his mannerisms and his voice through the dream. 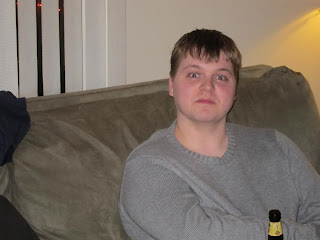